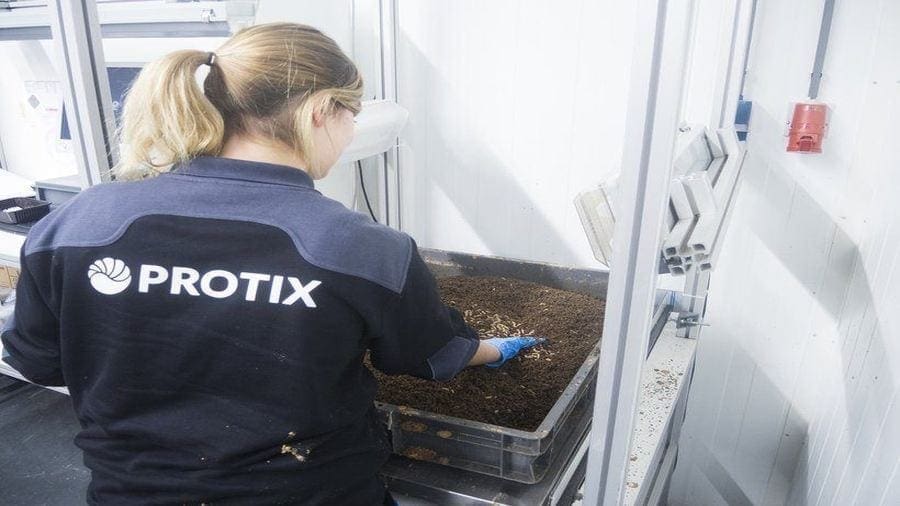 The new insect farm, said to be ‘the world’s largest and most advanced’ was established following a US$51.2 million (€45 million) investment with the support from food, feed and advanced material processing company Bühler.

The 14,000 square meter processing plant will produce protein for the animal nutrition sector, translating into feed for more than 5 million salmons, as well as for hens laying 250 million eggs.

he opening ceremony was attended by His Majesty the King of the Netherlands, Willem-Alexander.

“Protix has now fully transitioned into a commercially operating company with the new facility as proof of our progress,” said Kees Aarts, Founder and CEO of Protix. “We are leading the way here, technically, operationally, and commercially. The new fully automated processing solution provides a major quality increase with consistency improvements.

“This opening of the new facility, therefore, marks a major transition, not only for our company, but also for the entire sector and the markets we are producing for.”

Protix produces insects for sustainable proteins by using plant waste from the environment as feed for insects and also utilizing sustainable alternatives to non-sustainable sources, such as fishmeal and soy.

The proteins and other nutrients of insects are very nutritious and can be fed to animals, especially fish and chickens.

Farming occurs in a controlled environment, with high levels of automation while, sensor and data systems, robots, and climate controls are used to rear the larvae, which are used to produce protein meal and lipids for use in the animal nutrition sector to feed pigs, chicken, fish, as well as domestic animals.

Insects are regarded as sustainable sources of food and feed as they contribute to a circular economy by recovering nutrients from organic residues and bringing them back into the food value chain, thus reducing waste.

In addition to having the potential for health and growth benefits for animals reared on insect-based ingredients, insects can offer manufacturers lower cost source of proteins.

They can also be used to reduce the pressure on non-sustainable options including soy and fishmeal, even as consumers demand for sustainable ways of doing business.

A 2018 Innova Market Insights survey found that 64 percent of US and UK consumers expect companies to invest in sustainability.

According to the company, insect protein industry is growing, reportedly gaining US$300 million worth of investments last year.

“Protix is the most advanced insect company and has now demonstrated that insect protein is a serious alternative source of proteins for many applications,” said Ian Roberts, CTO of Bühler Group.

“With this new plant, we have proof that insect protein can be produced on an industrial scale. Now we must scale this solution globally to realize a more sustainable protein supply chain.”

Another global leader in the sector is the French agri-tech innovator, Ynsect which recently received backing from the European Commission in a US$22.6 million (€20 million) funding round.