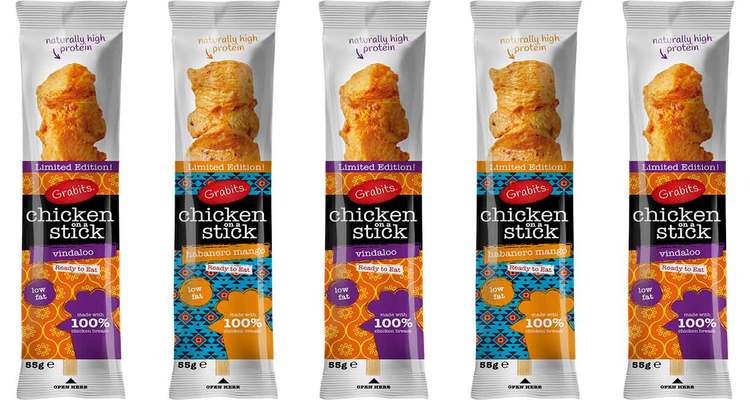 UK – Tyson Foods has unveiled two new flavor variants of its Grabits Chicken range in the UK to offer customers with flavorful products that are as well high in protein.

The new habanero mango has a natural mango flavour and a spicy kick from habanero peppers while the vindaloo chicken breast fillet is cooked in a spicy marinade.

“Grabits were initially developed as a high in protein, low in fat, healthier alternative to the standard calorie-laden snacks, as well as adding variety to the usual snacking options, and the same concept was applied to the vindaloo and habanero mango flavours,” said Felipe Castillo, head of marketing and innovation at Tyson Foods Europe.

According to Tyson, the new Grabits Chicken on a Stick range is ideal for health-conscious customers, addressing the need for healthy food alternatives in the food industry.

The two flavors have been revamped with new packaging designed by Manchester-based marketing agency Pelican Communications.

“We are looking to further grow our sales with our limited-edition flavours, and believe they will appeal to a wider audience while still providing our loyal customer base with the quality of a convenient snack on-the-go they’ve come to expect, which can be eaten hot or cold,” added Felipe Castillo.

The Grabits brand was bought by Tyson earlier this year as part of its US$340 million acquisition of BRF’s Thai and European operations.

The operations include products sold under Grabits, Hot ‘N’ Kickin’ Chicken, Speedy Pollo and the Sadia brands, in addition to key customer-owned brands.