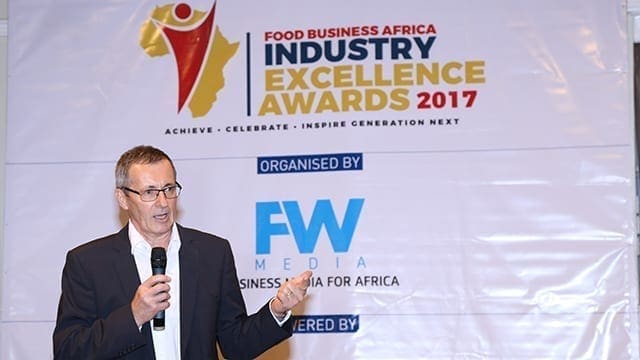 The training school won the highly regarded Project of the Year at the awards ceremony that was graced by some of the top business leaders from the industry in the region and beyond.

The Project of the Year award is given for either green-field or brownfield projects; major expansion or renovation of existing facilities; or major line or plant automation or incorporation of new technologies.

The Award is focused on highlighting some of the new projects and investments in the region – and is especially targeted at industry-changing projects that change the direction of a specific company, sector or the entire industry.

The Award is open for both manufacturers in the food, beverage, milling, feed and food service sector, suppliers to the sector and related industries and Government and research agencies.

“What stands out at African Milling School is the high level of investment and adoption of new technologies from Buhler and the outstanding dedication of the team at the school.

These attributes make the Milling School to be one of the most critical investments in the industry in Africa over the last few years,” said Francis Juma, the CEO of FoodWorld Media, the organiser of the Awards ceremony.

“The effect of the Milling School on the milling, feed and related industries in Africa will be hard to measure, but am sure that it will and is already having a profound effect on building the technical and managerial skills of people in the industry beyond Kenya and Eastern Africa, to Africa as a whole,” Juma added.

The training school had its first batch of trainees graduating in late 2016 after going through a two-year apprentice program.

This first group came from nine different African countries and joined the program in early 2015.

“The Award came in a bit late, but we thought that this investment needed to be celebrated – and to be engraved in the memory of all in the industry. That’s why it was the only other award we gave out at this year’s inaugural Awards ceremony, separate from the Industry Champions Awards,” Juma explained.

Martin Schlauri, the Managing Director of the Milling School, received the award bestowed upon the School at the inaugural Awards ceremony that was held on the evening of April 26, 2017 in Nairobi, Kenya.

During the ceremony a number of industry leaders also received their awards as winners of the 2017 edition of the Industry Champion Awards for their roles in shaping the food, beverage, milling and feed industry in the region.

Martin and the other winners were handed their awards at a glittering dinner and awards ceremony held at Southern Sun Mayfair Hotel in Nairobi, Kenya.

The celebration-themed Awards ceremony took place together with the Official Dinner at the AFMASS Conference & Expo, which was sponsored by Nestlé.

The Awards have a goal of inculcating excellence in the food & beverage and milling and baking industry in Africa through an annual competitive awards program.

The 2018 edition, which will be launched in September 2017, will be a bigger, more diversified awards ceremony, with about 20 categories up for nominations by the industry from Eastern Africa.

A new edition of AFMASS Conference & Expo is planned for October 2-4, 2018 in Lusaka, Zambia at a venue to be announced later. More info: www.afmass.com

More information about the awards is available at www.awards.foodbusinessafrica.com