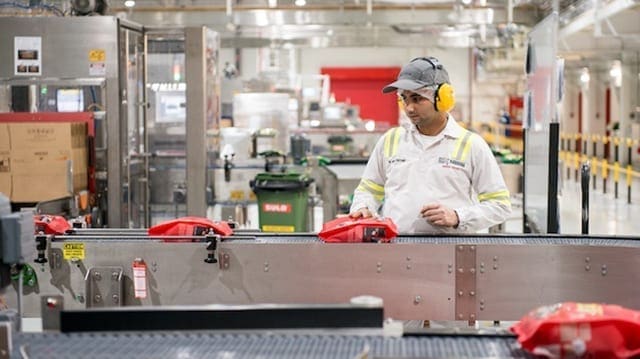 UAE – Nestle officially opened its Al Maha factory in Dubai on Tuesday, marking the opening of its 18th factory in the Middle East.

Located in Dubai South, the Dhs530m factory will focus on Nescafe and Maggi products, officials confirmed.

In the coffee line, initial production is expected to reach 22,000 tonnes annually, while on the culinary side, the Maggi products – which includes soups and stocks but not noodles – total capacity is anticipated at 20,000 tonnes per year.

However, the company “can expand” in the future depending on demand, officials clarified.

Groundbreaking of the factory took place in September 2014 and it had a soft launch last year. Currently, 340 employees work in the plant.

From a sustainability perspective, the factory runs on 100 per cent LED lighting, is insulated to save air-conditioning energy, recycles 100 per cent of waste from products and raw materials, and also is looking at installing solar panels.

“We have been in the region for more than 80 years and this is our third UAE factory,” Yves Manghardt, chairman and CEO of Nestle Middle East, told reporters.

“Dubai is stable, has a positive business environment and we have established strong relations with the authorities – hence we expanded here.”

The company’s two other factories are located in Dubai Investment Park and include one for its water division and another that manufactures chocolates such as Kitkat and Mackintosh’s Quality Street, as well as Nido products. All its factories are halal certified.

In terms of the products manufactured at the new plant, they will be used to supply the Middle East market.

“Our manufacturing strategy focusses on local sourcing for local production to cater to our local customers,” said Manghardt.

“But we could look to export further in the future,” he added.

Nestle’s Europe, Middle East and North Africa (EMENA) region remains a growing market, with the region accounting for 20 per cent of its global sales in 2016.

“In the GCC we expect a positive level of growth – although not necessarily the same as seen around five years ago,” said Manghardt.

Saudi Arabia remains the biggest market for the company, with a share of about 35 per cent.

The recent drop in oil prices, which in turn led to subsidy cuts and a spending slump in the country, did have an impact on operations, he admitted.

But with the kingdom recently reinstating some of the public sector perks, the market is expected to pick up, he added.

With regards to the introduction of value added tax (VAT) in the region from January 2018, the company said it is still waiting for clarification on which products may be exempted.

The 5 per cent tax will be “partly shared by internal efficiencies and in some cases by price increases”, stated Manghardt.

Looking ahead, Nestle has plans to further expand its manufacturing facilities in the UAE.

“By the end of next year, you can expect a new launch a bit more south and closer to Abu Dhabi,” said Manghardt without disclosing further details.

However, no new plants are in the pipeline for Saudi Arabia, he added.