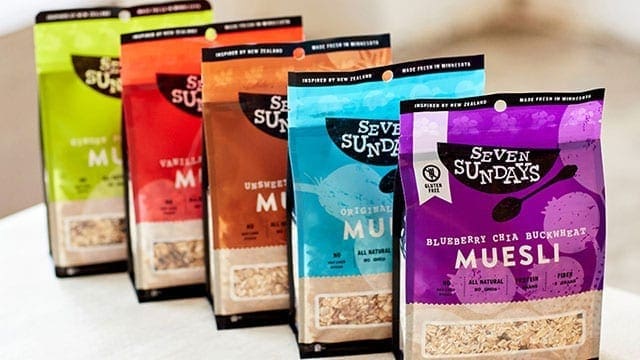 GERMANY – Katjesgreenfood, the investment arm of German confectionery giant Katjes Group, focused on “sustainable food”, has acquired a 15% stake in US muesli firm Seven Sundays through its Katjesgreenfood investment vehicle.

Katjes is a confectionery company based in Emmerich am Rhein , which mainly produces liquorice and fruit gums.

It is the third largest producer in the German sugar market behind Haribo and Storck.

Set-up in 2011, Minneapolis-based Seven Sundays is the best-selling muesli in the US, as Katjesgreenfood claimed.

It strives to deliver products that have maximum nutritional value and minimal environmental impact that means sourcing plant-based, nutrient dense ingredients that are as close to home and as clean as possible.

Seven Sundays is known for its honesty and transparency to the consumers, always working to meet their satisfaction. It is the fifth business in which Katjesgreenfood has invested in.

It recently snapped up 10% of German porridge firm Haferkater.

Dr. Manon Littek, the CEO of Katjesgreenfood, said: “The products of Seven Sundays are gluten-free, all natural and are obtained from regional farmers.

We are delighted that the most popular German-speaking breakfast category, muesli, is now continuing to record success in the American market.”

Katjesgreenfood also owns an 11% stake in Germany-based vegan supermarket chain Veganz where it took its stake from 5% to 11% through a share purchase announced in January.