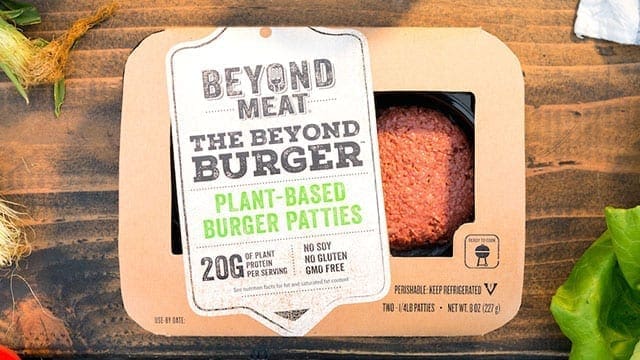 UK – Beyond Meat, a Los Angeles based producer of plant-based meat products, has announced plans to enter the UK market by 2018.

Beyond Meat’s burger has among its backers, Microsoft co-founder Bill Gates and Biz Stone (one of the founders of Twitter).

According to a report published by NPD Group, Midan Marketing and Meatingplace in 2015, 70% of consumers who eat meat are substituting a non-meat protein in their meal at least once a week.

Last year, Beyond Meat total plant-based meat sales topped US$606 million, which drove the company’s chief executive chairman to propose the expansion to the UK markets.

“If things go well, by the end of the first quarter of next year we should be in the UK market,” says Goldman.

“I’m very excited to be one of the first people in the UK to taste the Beyond Burger and it’s wonderful to see so many innovative plant-based products being developed which are kind to animals, the planet, and our health,” said Compassion in World Farming’s patron, Joanna Lumley.

“We’re aimed at meat-eaters, so many people are coming over to eating more plants – we call them reducatarians.

We’re aimed at anyone who has been told by their doctor they need to cut their red meat consumption, which is almost everyone,” explains Seth Goldman, executive chairman, Beyond Meat.

“We’re sold in the meat section rather than the veggie section, which is a real breakthrough.”

The Beyond Burger has 20g of protein (more than a meat burger), is cholesterol free and contains no gluten, soy or GMO ingredients and is suitable for vegans.

The company’s aim is to get everyone, not just vegetarians and vegans, eating more plants.

He believes that once the new pool of consumers will react to the company’s vegan products, and expands the yield sales, it will have made a movement that will flourish the meat markets in the US.

He however, said that Beyond Market does not plan to expand farther into Europe in the near future.

“We want to go faster but we don’t want to get too fast. … So rather than encounter five different challenges, let’s go to the U.K., let’s get it up and running,” Goldman told just-food.

“As soon as we we’ve got this, and it is working; it’ll be easier to go elsewhere.”