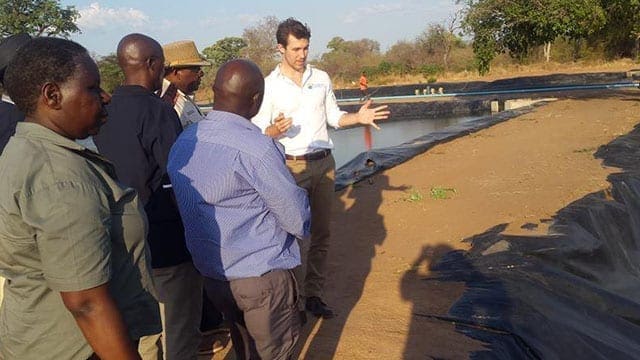 President Lungu said the growth in aquaculture yields is a pure demonstration that the country is on the right track to boost fish production, which should enable the country to cut fish imports and instead promote local production for export.

The Head of State said this in Lusaka today when he launched the five years Zambia Aquaculture Enterprise Development Project to be implemented from 2017 to 2022 at a cost of US$50.89 million, of which 89.2 percent will be funded by the African Development Bank (ADB) while the Zambian government will contribute 10.8 percent.

Mr. Lungu noted that the project is important to the subsector as a viable and inclusive business opportunity to improve the livelihoods of beneficiaries in the aquaculture value chain.

He added that the project will also help fish farmers to improve their business and managerial skills including the quality of their productive systems.

The President indicated that on the other hand, the project will benefit about 12,00 fish farmers and entrepreneurs comprising 50 percent women and youth in the identified high potential aquaculture areas.

And President Lungu has noted that there are also indirect beneficiaries of about 50,000 business entrepreneurs in the aquaculture value chain such as fish processors, fish traders, fish transporters and employees.

He has since thanked the ADB for its unwavering support to fund the project, which is the first of its kind in Africa and has warned the Ministry of Livestock and fisheries against any bureaucratic delays or departure from the project’s objective.

Meanwhile, the President has noted that despite the annual increase in fish production, the country still has a deficit of 87,000 metric tonnes due to increased human population and demand for fish as a source of cheap protein.

President said the country therefore needs to accelerate the aquaculture development and government has since provided an enabling environment for expansion.

And Minister of Livestock and Fisheries Michael Katambo has noted that by the end of the project the country is expected to double its fish production and productivity from aquaculture.

Mr. Katambo said the project is expected to create an enabling environment for the supply of 98 million fingerings, which are key components in fish farming.