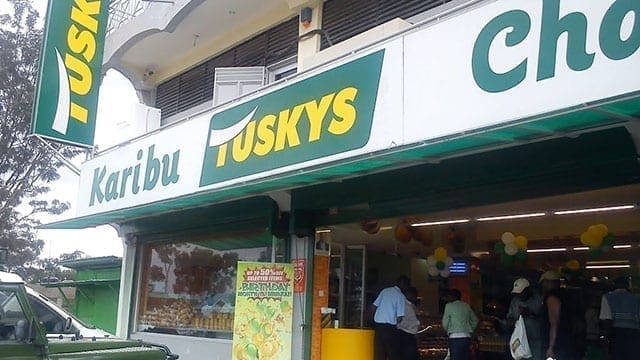 KENYA – The battle to save Nakumatt Supermarkets yesterday took a new turn after rival Tuskys offered to inject Sh650 million into the troubled retail chain and recurring payment guarantees of between Sh1.5 billion and Sh3 billion for the outstanding debt.

The offer is subject to the Competition Authority of Kenya (CAK) approving a takeover bid by Tuskys.

Tuskys, which has expressed interest in acquiring a 51 per cent stake in Nakumatt, now says injection of the funds and issuing of guarantees to suppliers should enable the troubled retailer to get its operations back to normalcy and in turn repay its heavy debt that currently stands at between Sh30 billion and Sh40 billion.

“We hereby write to confirm that we remain committed to conclude the share purchase agreement that will result in our taking of a majority stake in the company and to meet our obligations under the management services and loan agreement,” Tuskys says in a letter to Nakumatt chairman and chief executive Atul Shah which has been filed in court.

“…and in particular, advance the sum of Sh650 million to meet operational costs including payment to employees and landlords and provide recurring payment guarantees of between Sh1.5-Sh3 billion to suppliers to ensure suppliers supply stocks to the company’s outlets.”

Under the proposed takeover deal, Tuskys will pump in Sh650 million to cater to the employees’ salaries and rent for Nakumatt stores.

Nakumatt yesterday made the Tuskys funds injection proposal public as it filed a fresh application in court seeking to have an administrator appointed to run its affairs until it gets back on its feet.

Mr Shah said the retailer’s creditors have not warmed up to proposals so far made for settlement of the debts.

Nakumatt says its major bankers, who are yet to publicly declare how much it owes in loans, have supported both its bids to appoint an administrator and sell a majority stake to rival Tuskys.

The decision to appoint an administrator followed a refusal by Nakumatt’s creditors to grant it 60 days to make a fresh proposal on the payment of debts.

The retailer had sought the 60 days to complete the proposed takeover deal with Tuskys and come up with a new strategy for the settlement of debts.

As part of its application for appointment of an administrator, Nakumatt has filed in court minutes of a board meeting in which directors agreed it was the best way to counter the creditors’ refusal to give the retailer more time to settle its debts.

Mr Shah, his sons and co-directors Neel and Ankoor attended the meeting.

Mr Shah has proposed that Peter Obondo Kahi, the PKF partner in charge of forensic and business recovery in East Africa, be appointed by the High Court to lead its recovery.

He says there is a real danger of Nakumatt being wound up as 90 of its creditors have turned up in court seeking the same.

“The company is in real danger of being wound up as various creditors have joined in the (insolvency) petition herein as supporting creditors. Further, various landlords have sought to exercise right of re-entry in respect of several key premises of the company.

“An administration order is reasonably likely to achieve a better outcome for the company’s creditors as a whole and ensure continuity of the company’s business as a going concern as opposed to the drastic action of winding up the company,” Mr Shah says.

Nakumatt has also filed in court a letter from KCB confirming that the lender has no objection to the appointment of an administrator to run the retailer’s affairs and implement a turnaround strategy.