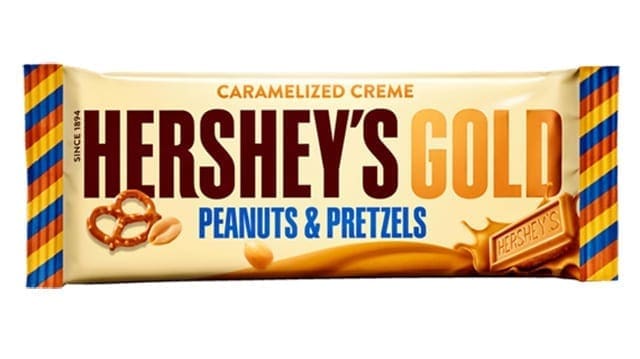 USA – The Hershey Company, the leading manufacturer in United States confectionaries, has announced the official launch of Hershey’s Gold bars, the fourth flavor in the history of the iconic brand.

The brand was launched in celebration of the brand’s official sponsorship of the United States Olympic Committee (USOC).

The new bars are a caramelized creme that feature salty peanut and pretzel bits to give consumers a sweet, buttery taste that is topped off with a creamy and crunchy finish.

Hershey’s flavor history began in 1900 with the launch of its iconic milk chocolate bar, followed by Hershey’s Special Dark chocolate in 1939.

“We use a proprietary cooking process to transform the white creme into a golden bar by caramelizing the creme, which helps maintain a sweet, creamy taste.

The launch of Hershey’s Gold will introduce Americans to a new flavor and a new experience unlike any others before.”

The new product launch, which syncs up with the official 100-Day countdown to the PyeongChang 2018 Olympic Winter Games, will be a permanent addition to the Hershey’s line-up.