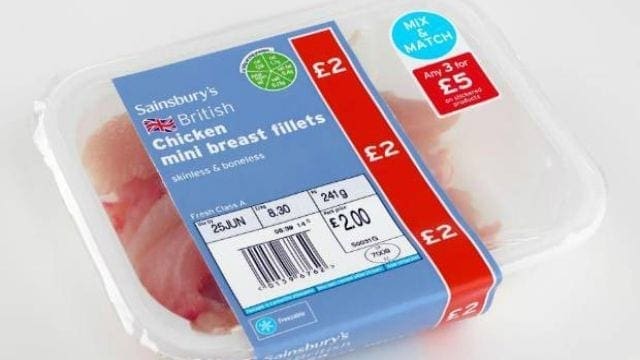 UK – Sainsbury’s, one of the largest supermarket chains in the UK has revealed plans to introduce touch free meat packaging, that allows customers who fear touching raw meat to cook them without directly touching the product.

Their chicken products will be packaged in straight-to-pan plastic pouches, referred to as ‘doypacks’ within the industry to meet the growing demand of the preoccupied and squeamish millennial consumer.

The chicken-in-a-pouch set to be released in May include a range of citrus tikka chicken pieces and teriyaki-style pieces and the packaging will be extended into the pork and fish categories based on its success.

“These bags allow people, especially those who are time-poor, to just ‘rip and tip’ the meat straight into the frying pan without touching it.”

The new touch-free packaging is said to have been motivated by some factors not limited to fears of food poisoning, busy lifestyles, and growing popularity of dining-out.

This is also sparked by concerns that shoppers are moving away from meat, some opting for vegetarian or vegan diets or meat replacement products.

According to Ruth Mason of the National Farmers’ Union, the market for meat-in-a-bag has grown especially for chicken.

“We have seen sales data of those, and we are aware they have done very, very well,” said Ruth Mason.

“We know one of the reasons is because consumers do not have to touch a raw bird.”

Young millennials, under the age of 35, fear when they anticipate having to handle uncooked meat and this, together with fear for contamination by bacteria such as campylobacter, found in some raw poultry has led to a sluggish growth in the meat industry.

Mintel reports that under 40% of young cooks prefer not to handle raw meat, compared with a little more than a quarter of the broader population.

More vegan convenience foods that make cooking easy are anticipated to increase even as the plant-based meat market expected to reach US$5.2 billion in sales by 2020.