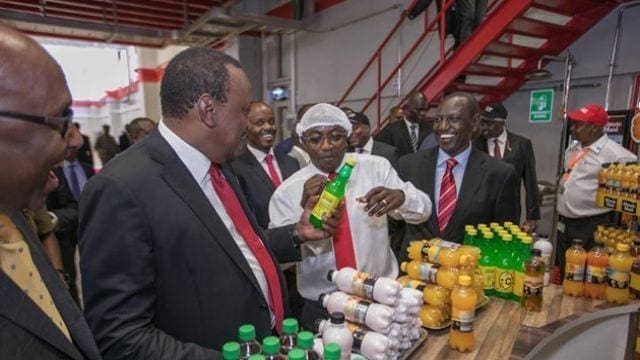 The line which has a production capacity of 28,000 bottles per hour will be used to process fresh juices, iced teas and sports drinks and according to the company, it has created 24 jobs at the plant.

The new processing line was the first to utilize hot-fill technology in Kenya and the second in East Africa after another one, which CCBA owns in Uganda.

According to Duncan Kimani, the Manufacturing Director for Coca-Cola Beverage Africa, the new automated technology used at the new plant offered improved shelf-life of 6-months on the preservative free products and was a ‘game changer in Kenya and the region’.

In a statement, the company indicated that the hot-fill juice facility impacts over 30,000 local farmers during fruit harvest season and over 1500 employees working at the plant.

The new line was inaugurated by President Uhuru Kenyatta who reiterated that the investment compliments his Big Four agenda, which aims to create 1.3 million manufacturing jobs by 2022, expand food production and supply, provide universal health coverage for all Kenyan homes.

Coca-Cola is working in collaboration with local farmers from whom it sources fruits and currently for its newest product Mango with bits, the fruit comes from Murang’a, a way President Kenyatta commended to boost local agriculture.

“The Public Procurement and Disposal Act will give close attention to the requirement of the 40 per cent local content policy which Coca-Cola is already exceeding,” said President Uhuru Kenyatta who presided over the launch.

Nairobi Bottlers opened the new juice plant in May 2017 as the company expands its product offerings to meet the growing demand for refreshing but healthier drinks.

In August 2017, the beverage company announced a US$30 million investment in a hot-fill technology for production of Minute Maid products produced in four variants namely Pulpy orange, Mango, Tropical and Apple.

Nairobi Bottlers is on a journey to a total beverage company under CCBA even as it works to deliver on Coca-Cola’s ambitious goal to invest S$17 billion over the years to 2020.