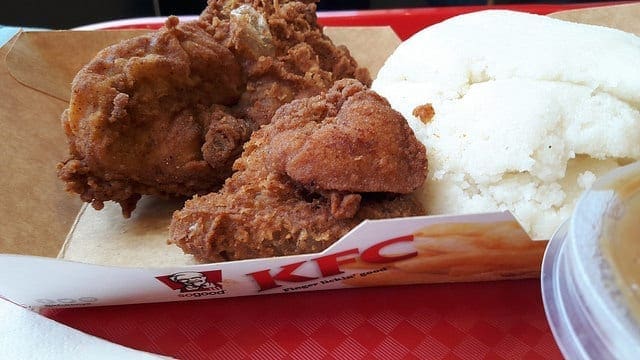 UK – KFC UK and Ireland have announced a commitment to remove 20% of calories per serving by 2025 by offering healthier and lighter side options in its menus in the UK and Ireland.

KFC is also considering offering alternatives to fries, low or zero-calorie soft drinks and a trial on vegetarian option set to be tested with customers later in the year.

The vegetarian option will be an alternative to fried chicken to meet the calorie reduction goal given a steady, ongoing rise of health-conscious consumers who are quick to identify as vegan, vegetarian or ‘flexitarian’.

According to FoodBev, the restaurant chain will introduce more lunch and dinner dishes less than 600 calories by 2020 in regard to Public Health England’s calorie-reduction campaign, which recommends 400 calories for breakfast, 600 for lunch and 600 for dinner.

Changes will also include its range of offerings by 2019 with an aim to increase choice, improve taste and give customers a range of options, that is help them consume five portions of fruit and vegetables a day as recommended.

“We know people are more passionate than ever about eating well, and we face a big challenge in shifting their perceptions of what we offer.

We’ve done it before, though – the success of our Riceboxes has shown that our fans will go for lighter options from us.

“That said, we know any new menu and recipe changes will have to be just as tasty as today – our fans absolutely love our original recipe chicken, and we won’t be changing the Colonel’s secret recipe of 11 herbs and spices.

This is about providing choice, and offering delicious, signature KFC taste that just happens to be lighter,” said KFC UK and Ireland general manager Paula MacKenzie.

According to her, the programme will not only provide our customers with an amazing, tasty range of healthier lunch and dinner dishes, but we’ll also be helping find ways to support them to make the lighter choice.

She said their brand was committed to help grow the fast food industry which is shifting from products such as animal protein to ‘healthier’ options that is, plant-based meat alternatives.

Demand for plant-based products has risen 140% (according to Onegreenplanet) in recent years, prompting fast food giants as McDonald’s, Burger King, and White Castle invest in meat alternatives on their menus.

KFC is also on record to introduce a meat-free chicken alternative in the UK and Ireland.