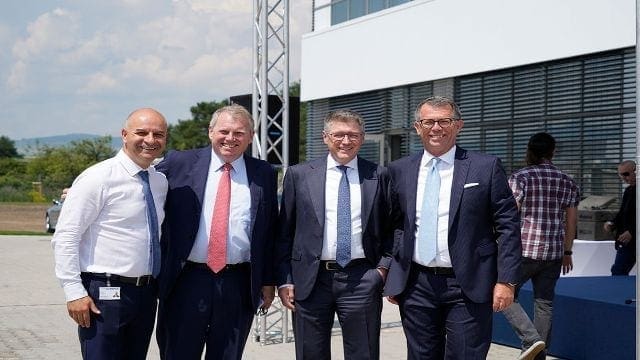 GERMANY – Multivac, one of the leading providers worldwide of packaging solutions has inaugurated a new production plant in Bulgaria, the first in the Eastern Europe.

According to the company, the facility includes a state-of-the-art warehouse and logistics centre, a training centre and an administration building.

In addition to the Bulgarian sales and service company headed by Trifon Filipov, an international Shared Service Centre for IT, Strategic Purchasing, Design and Service will also be housed in the new building.

The new manufacturing plant of MULTIVAC Bulgaria Production Ltd is located in the industrial area of Bozhurishte and has a total surface area of around 20,000 square metres.

The ground-breaking ceremony for the new production facility was celebrated in September 2016.

A total of 18.8 million euros were invested and more than 150 modern and secure jobs were created.

Several initiatives were started by the company as far back as 2015 to attract young professionals in IT and logistics, among other areas.

“We are pleased to celebrate the opening of our first production facility in Eastern Europe here in Bozhurishte after a construction period of roughly two and a half years”, said Hans-Joachim Boekstegers, Managing Director and Group CEO of MULTIVAC.

“Working in three shifts at this site, qualified specialists will produce machine parts and assemblies that meet the MULTIVAC quality standard.

We are using modern turning and milling machines just as we also use at our headquarters in Germany. Incidentally, just a few weeks after commissioning, we are already utilising our full capacity.”

Ivaylo Dimitrov, Managing Director of Bulgaria Production Ltd, added: “We are proud that the MULTIVAC Group has opted for Bulgaria as the place to expand its production capacity.

Our goal is to be one of the most modern production sites within the Group and to guarantee the high MULTIVAC standards through our specialists.”

In addition to the new plant in Bulgaria, MULTIVAC has eleven additional production sites in Germany, Austria, Spain, Brazil, Japan, Finland and the USA, as well as more than 80 sales and service companies worldwide.