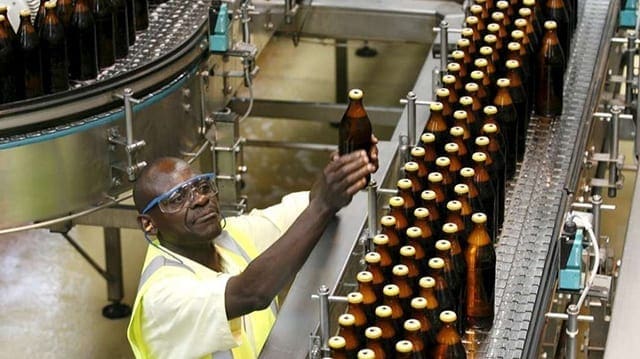 KENYA – The East African Breweries Limited (EABL), a subsidiary of the British multinational Diageo Plc, has reported 4.57% increase in revenue to US$731.8 million attributed to strong sales in its spirits segment and bottled beer in Kenya and Tanzania.

The brewer is now banking on increased sales of its spirits in the region and a significant recovery in bottled beer sales to boost its yearly revenues following the inauguration of a new US$8.96 million spirits line at its Nairobi plant.

The regional beer giant saw its total beer volumes up 7% and net sales revenue up 5%, while gross profit rose 4%.

However, net profit after tax for the year declined 15% blamed on higher costs tied to its investments in the new Kisumu brewery and tax expenses following revisions in the alcohol segment.

At the regional level, Tanzania’s net sales revenue rose an impressive 41% after several years of poor performance, buoyed by aggressive growth in the newly introduced Serengeti Lite while Uganda saw a 4% growth.

The second half of the year was particularly impressive for the brewer, seeing an 18% growth in spirits sales from a flat figure at the end of the first half, recording 8% growth for the total year.

Bottled beer grew 12% compared to 7%, with a 9% growth in the year; while Senator recovered somewhat from 22% fall in sales in H1 to a 3% fall in H2, falling 13%, the first time has seen the lower value brand fall in volume a number of years.

In Kenya, the company saw a recovery in bottled beer volumes in the year, rising 5% in the year, after struggling to grow the line in the last few years, while mainstream spirits like Kenya Cane and Chrome grew 22% versus 7% for the total spirits line.

In Tanzania, the brewer successfully introduced Serengeti Lite while Serengeti Premium beer grew well during the year, while the spirits line recorded a 5% growth after the introduction of Smirnoff X1.

New product innovations were especially strong in their contributions this year, recording a 22% growth in sales figures, especially in Tanzania where they grew 38% and Kenya, with 21% growth.

During the year, the company started producing some international spirits such as Captain Morgan rum locally in a strategy to cut prices and offer a more diverse portfolio favoured by consumers.

Speaking to Reuters, the company said it was investing US$13.88 million earmarked for the spirits division and it was expecting spirits to contribute half of its annual revenue in the next five years.

“Spirits will be a big part of sales this year,” said EABL managing director Andrew Cowan in a press briefing.

This division is favoured by the growing middle class, and according to Euromonitor, spirits are one of Kenya’s fastest growing alcoholic beverages category compared to beer, whisky and wines.

“The growing young population in Kenya has been providing an opportunity for strong growth,” a report by the London based research firm affirmed.

To further growth in the year, the Kisumu brewery which is ready for commissioning and is at the taste-testing stage will be commercialized in addition to speeding innovations for its model brands like Serengeti Lite, Tusker Cider, Black & White, Uganda Waragi flavours.

The brewer has targeted the new Kisumu brewery to brew mainly its Senator keg beer, with a focus on the western Kenya region.

It has already recruited over 15,000 farmers from Kisumu county to grow sorghum which is the main raw material at the brewery.

The company plans to officially open the brewery later in the year.