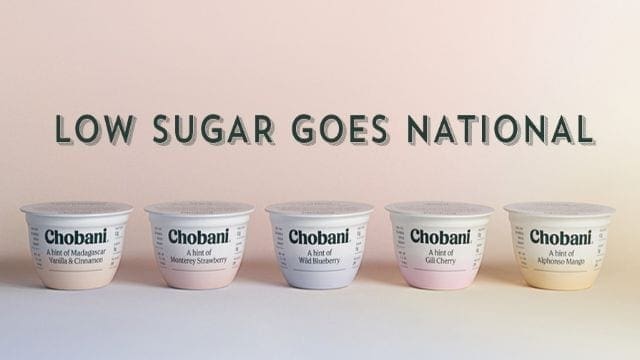 USA – Chobani, America’s number one Greek Yogurt, has launched “Hint Of” line, its first foray into the growing lower-sugar segment of the national yogurt market.

The nation’s No. 1 Greek yogurt maker launched the line, made solely at its South Edmeston plant in Chenango County, in December as a test, with limited distribution in the Northeast, Florida and the Pacific Coast.

According to the company, the sales went well and now it will be selling it throughout the nation.

Peter McGuiness, Chobani’s chief marketing and commercial officer, said consumers in all parts of the country should see the line in their local supermarkets by the end of August.

Chobani’s new “Hint Of” line of lower-sugar Greek yogurt comes in a variety of flavors.

Priced at US$1.49 per 5.3-ounce cup, “Hint Of” is targeted to people looking for a less sugary, but still tasty, Greek yogurt.

McGuiness said Chobani has made the fruit in the “Hint Of” line slightly more concentrated, allowing it to use less sugar while keeping the fruity taste, he said.

When Hamdi Ulukaya founded Chobani in South Edmeston in 2007, his Greek yogurt was marketed as healthier than regular yogurt because it was higher in protein and contained only 15 grams of sugar.

At the time, most yogurts contained about 30 grams of sugar.

Since then, other brands have lowered the sugar content of their regular yogurt, and some have introduced “light” versions that have less than 10 grams of sugar, with some using sugar substitutes like stevia and aspartame.

McGuiness said the lower-sugar segment of the yogurt market accounts for approximately US$1 billion in sales and is growing rapidly, as overall yogurt sales in the U.S. total about US$8 billion a year.

“We think the yogurt market in the U.S. is under-penetrated and has a tremendous amount of growth ahead of it,” McGuiness said.

“We look forward to championing that growth.”

Chobani employs 1,000 people at its manufacturing plant in South Edmeston and its corporate offices in nearby Norwich.