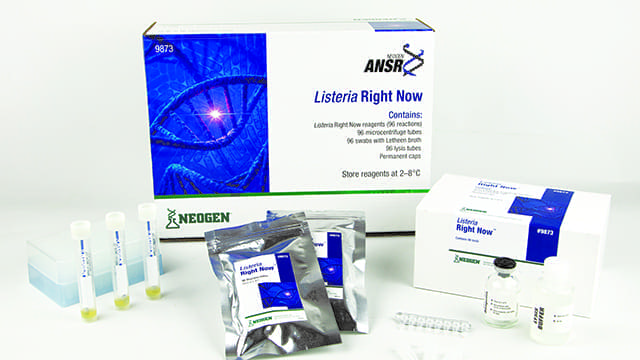 It is a complete system for taking environmental Listeria tests with molecular-level accuracy that requires no enrichment, so there’s no need for processors to grow bacteria cultures on-site.

Validated by AOAC and NSF International, the technology allows food production and processing facilities to seek and eliminate Listeria more quickly, which can reduce the risk of cross-contamination of food products, keeping consumers safe.

The system provides results in under one hour, much faster than traditional methods, which can take up to several days.

“It comes as the result of a lot of hard work and ingenuity on the part of Neogen’s R&D and validation groups.

The Listeria Right Now system is truly revolutionary, and having this approval validates this new technology platform.”

The test-kit offers rapid tests by using a technology that targets rRNA, which is present in much greater numbers than the traditional DNA target.

An isothermal reaction also causes the replication and amplification to occur at a constant rate instead of the normal thermal-cycle technology from traditional PCR systems.

The product was declared the winner of the 2018 Innovation Award from the French organization Carrefour des Fournisseurs de l’Industrie Agroalimentaire.

Neogen is also recognized for development of animal genomics along with the manufacturing and distribution of a variety of animal healthcare products, including diagnostics, pharmaceuticals, veterinary instruments, wound care and disinfectants.