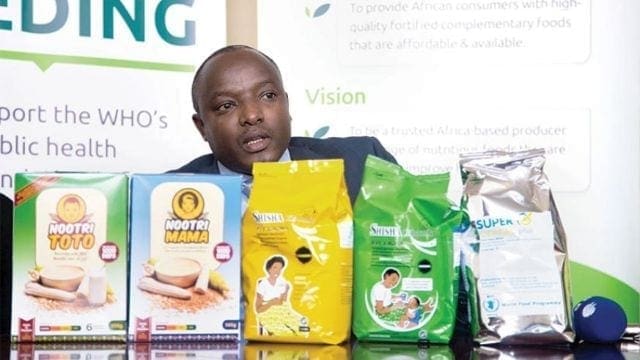 RWANDA- Africa Improved Foods (AIF), a joint venture between the government of Rwanda and a consortium of Royal DSM and investment firms has received the first SDG Award for sustainable consumption from the Swiss Green Economy Symposium (SGES).

The event held 4 September in Zurich, Switzerland features companies committed to sustainability, with project distinctions focused on implementing the United Nations’ sustainability goals while integrating local knowhow with the expertise of global players.

AIF manufactures high quality, fortified and nutritious complementary foods and was recognized for applying new approach to fight malnutrition in Africa while promoting local production by directly buying farmers’ yields of maize and soy against cash at competitive prices.

Its nutrition portfolio including the commercial brands Nootri Mama, Nootri Toto and the latest Nootri Family (for all age groups) was commended for addressing nutrition needs among vulnerable segments of the population.

The segment comprises porridge ﬂours with added milk, vitamins and minerals targeting vulnerable population segments such as pregnant and breast-feeding mothers, older infants and young children for the critical ﬁrst 1,000 days of their lives.

“We were impressed by the way in which Africa Improved Foods combines its social commitment with the successful networking of public and private players,” said Dr. Anne le Duc, CEO of SGES.

The joint venture officially opened the US$61.55 million facility in May 2017, but has been producing enriched grain flakes since the end of 2016.

The company unveiled its new product, Nootri family with an aim to increase its export market share.

It is also looking to double its local sourcing for maize, sorghum and soya from local farmers and cooperatives this year.

Apart from the support from its partners such as Dutch development bank (FMO), DFID Impact Acceleration Facility managed by CDC Group plc and International Finance Corporation (IFC), the fortified foods manufacturer works in collaboration with the Swiss technology company, Buhler.

Bühler has been collaborating for years with DSM and has developed, built, and started up the factory and production processes of AIF.

“We chose Bühler because we wanted a reputable company that knows how to build in Africa and quite generally under adverse conditions without compromising on quality and that will be with us through all the challenges,” Amar Ali, CEO of Africa Improved Foods.

“There have been many challenges, and Bühler has been there as a partner throughout.”

AIF looks to build its capacity to feed 2 million people and be able to reduce stunting in Rwanda from 38% to 32% by 2020, which is a 6% reduction.

This will be possible through a collaboration with DSM, the majority shareholder and initiator of the company who will work on innovation to address issues such as nutrition and health, climate, energy, resources and circularity.

“With our economic development model, we can make a strong and sustainable social impact on our entire environment, and this in a sustainable way,” said Ali.