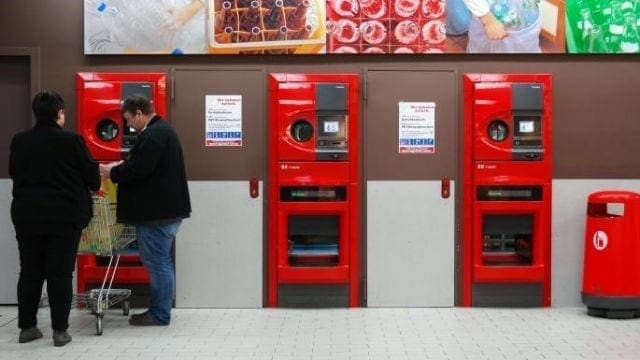 UK – Tesco shoppers can now claim 10p for every plastic bottle they return to selected stores, under a new trial announced by the supermarket giant as part of its efforts to reduce plastic waste, using the reverse vending machines at the stores.

The in-store recycling machines, which are already in place at some rival supermarkets including Iceland and Morrisons, give shoppers cash back for every plastic bottle returned. The bottles are then sent for recycling.

The machines have been installed in Tesco stores at Borehamwood, Swansea, Edinburgh, Manchester, and Birmingham, and will pay 10p per bottle for up to 10 bottles per customer per day.

According to FoodBev, the move comes as the government prepares to unveil a nationwide bottle deposit scheme that could drastically improve recycling rates for plastic bottles in the UK.

Currently only about 57 per cent of the 13 billion plastic bottles used in the UK each year are recycled.

“We are already committed to eliminating single use plastic wherever we can and make recycling simpler for customers. Today is another step in that direction,” said Jason Tarry, Tesco’s CEO for the UK and Ireland.

But he called on the government to urgently overhaul the country’s approach to recycling to make the system more streamlined and consistent across different regions.

“We would urge the government to move to a single, nationwide approach to waste collection that makes it much easier for people to recycle,” he said.

Tesco also announced that customers will be able to use their own Tupperware containers at meat, cheese and fish counters in all UK stores from October 3.

For those that do not bring in a container, purchases will now be wrapped in recyclable paper rather than plastic.

The moves are part of the firm’s plan to ensure all its packaging is fully recyclable or compostable by 2025.

Iceland was the first UK supermarket to install an in-store reverse vending machine, in support of the government’s intention to introduce a deposit return scheme in England.

Iceland’s reverse vending machine accepts any Iceland plastic beverage bottle and repays customers with a £0.10 voucher to be used in store for each bottle recycled.