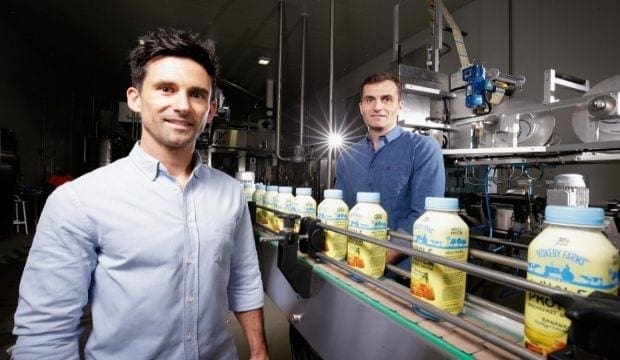 AUSTRALIA – Australia’s first kombucha maker, The Coca-Cola Co and its local bottler Coca-Cola Amatil have agreed to buy a 45% stake in Melbourne-based beverages business Made Group.

According to Packaging News, sales have been growing by more than 20% a year over the last few years – fuelled by the consumer shift towards healthier and functional beverages – and now have an annualised retail value of around US$130 million.

Made co-founders Luke Marget, left, and Matthew Dennis have sold a 45 per cent stake in their company to The Coca-Cola Co and Coca-Cola Amatil.

“Our aim is to bring the Made range of products to an even wider audience through our expertise and reach in distribution,” Ms Watkins said.

“There’ll be no changes to the flavours or ingredients. Made Group co-founders Luke Marget and Matt Dennis will stay on in charge of the business and keep doing what they love – developing and producing a fantastic food and beverage range.”

TCCC and CCA, which sells soft drinks and bottled water to about 115,000 outlets nationally, will help Made expand its market reach and distribution.

The company currently sells its products through about 10,000 retail outlets including Coles and Woolworths, petrol and convenience stores and independent retailers and cafes.

Terms of the deal were not disclosed. Made, which had been seeking equity partners for about two years, was advised by Macquarie Capital.

TCCC and CCA will each own 22.5% of the company and will have two seats on the Made board. Mr Marget, Mr Dennis and their families will retain the remaining 55%.

The joint ownership structure is unusual for Coke, which has been snapping up non-carbonated drink brands around the world.

Coca-Cola Australia president Vamsi Mohan told The Australian Financial Review the Made acquisition, like that of MoJO Kombucha, reflected the beverage giant’s continued evolution towards being a total beverage company with brands for all consumption occasions.

For CCA, the acquisition is in line with the bottler’s accelerated growth strategy, under which it is reinvesting about US$40 million of cost savings into prices, marketing, cold drink equipment, digital technology and new products in an attempt to reverse a long-term slide in volumes.

“Part of that plan was improving our position in emerging categories and brands,” Ms Watkins said.

“The Made investment will give us an opportunity to step into these categories by distributing the products faster – it’s very much in line with that accelerated growth plan.”

Mr Dennis and Mr Marget quit their jobs in investment banking and finance to start making functional beverages, starting with NutrientWater, 13 years ago.

The risky move has paid off in spades and some of Made’s brands are now market leaders.

“The 45% investment allows us to maintain control of the business and continue to operate it independently with the same entrepreneurial spirit we’re known for,” said Mr Dennis.

“It’s a great opportunity for us to continue to do what we do but to grow a lot quicker.”

Later this year Made will move into a new US$45 million state of the art manufacturing facility in South Dandenong in Melbourne.