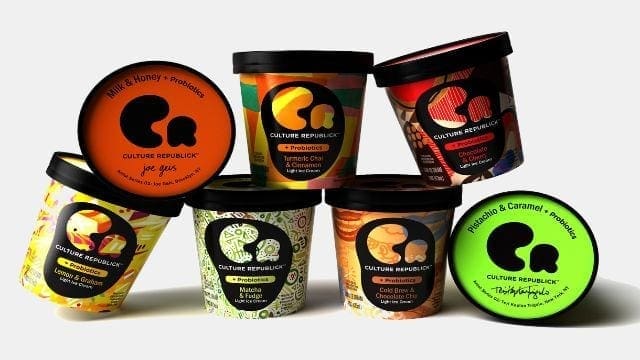 According to FoodBev, Unilever’s 10% of the brand’s profits will support the arts in local communities, and the brand will collaborate with emerging artists to design each pint tub, meaning that the brand “supports culture both inside and out.”

“Culture Republick was created with a distinct purpose in mind. We believe that humanity could use a bit more brightness.

By combining our passions for culture and ice cream, we intend to do our part in making people feel more balanced, inspired and connected,” said Leslie Miller, marketing director of ice cream at Unilever.

FoodDive also added that as consumers become increasingly interested in gut health, manufacturers are pumping probiotics into everything from beer, candy, cereal and cookies, to more conventional sources like yogurt.

BCC Research projects the probiotics market will grow from US$32 billion in 2014 to US$50 billion globally by 2020.

Millennials are particularly interested in the sector, which is also helping drive growth and could help Culture Republick.

According to Mintel’s ice cream study, about 11% of Americans actively avoid “healthy” frozen treats because they are “meant to be treats.”

At the same time, research from Mintel shows the ice cream and frozen dairy dessert market has grown 7% between 2014 and 2016, which indicates that when Americans are looking to indulge, they want the real deal.

Culture Republick seems to give them just that, but also adds in a dash of probiotics for good measure.

As part of the Unilever parent company, the brand has access to a massive distribution network and well-funded marketing.

Halo Top might have proved that all you need is a camera and a hashtag for explosive marketing, but a trusted parent company could help.

Still, Culture Republick will need to drive excitement and loyalty fast if it wants to topple the growing Halo Top empire.

Culture Republick is now available from selected US retailers, with a suggested retail price of US$3.99 to US$4.99.

Each pint tub contains three billion live active cultures, between 400 and 500 calories, 16-18 grams of protein, 11-12 grams of fibre and no artificial sweeteners.