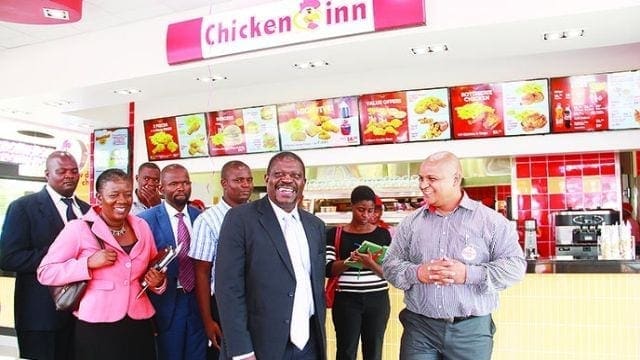 The company is engaging relevant stakeholders and carrying out a feasibility studies on the market for the new outlet.

The Gokwe outlet will also have Piazza Inn as well as Creamy Inn.

“There are a number of our customers who travel from as far as Gokwe just to buy our popular two piecer, so we decided to open a stand-alone branch for them in town.

Gokwe is one of the largest districts and the place is developing fast,” said Mr Xolisani Gama, Simbisa Brands Southern Region operations manager.

“We are currently engaging council and the District Administrator’s office as we try to scout for the best position for the outlet.”

During the survey exercise, Gokwe folks will have a chance of buying chicken and chips, ice cream and pizza from the company’s mobile truck.

When opened, Mr Gama said, the company will employ locals and also buy raw materials like potatoes and chicken from Gokwe.

The company is looking to hire about 30 workers all sourced locally, five of which will be providing expertise.

In light of the cholera outbreak, Simbisa Brands will donate sanitizers to the town council to be used in public toilets, public gatherings and other places, said Gama.

The expansion proves its commitment in consolidating its operations in the regional market.

This is driven by growing demand for its products across major cities in the country such as Harare, Bulawayo and Gweru.

It has also expanded into Gwanda, south east of the city of Bulawayo with its Chicken Inn and Creamy Inn outlets.

In 2015, Simbisa Holdings invested US$900 000 in setting up a Chicken Inn drive-through service at the Zimbabwe International Trade Fair grounds in Bulawayo.

It invested US$4.3 million for the expansion of its operations in Kenya, Zimbabwe and Mauritius.