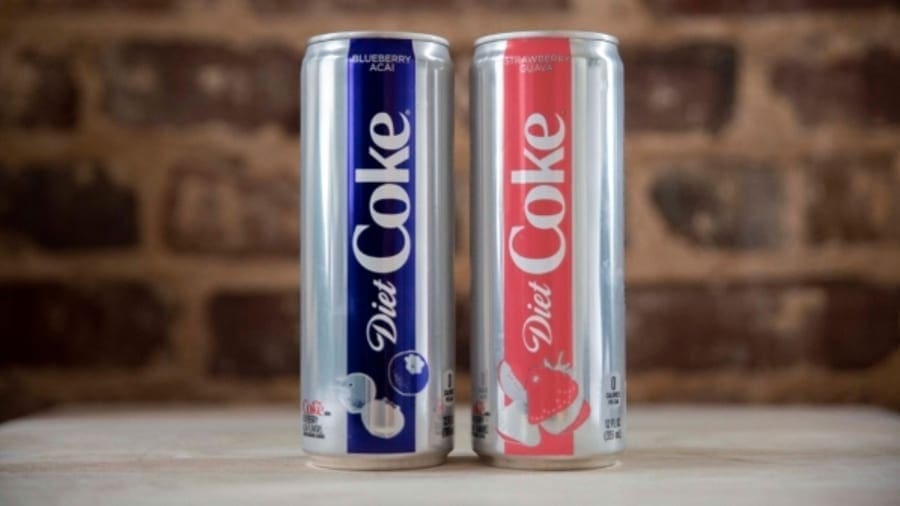 USA – The Coca Cola Company has launched two new flavor variants of the Diet Coke alongside new marketing content as part of the Because I Can campaign it launched in January last year to support rebrand in North America.

The two variants, Blueberry Acai and Strawberry Guava are zero-calorie sparkling beverages that adds to the line-up of Diet Coke range, that is Ginger Lime, Feisty Cherry, Zesty Blood Orange and Twisted Mango.

Both flavors, which hit stores nationwide in mid-January, are available in sleek 12-oz. cans and sold as on-the-go singles and in eight packs.

These new flavors are highly incremental to our current flavors and will continue to drive excitement for the brand.
Flavor variety is key because it provides more points of entry into the brand. Different consumers have different favorites, so it’s important to offer a range.
And we’re finding that when new drinkers try a flavor, they’re also more likely to reach for (original) Diet Coke.

Coca Cola plans a six-months nationwide sampling activation that will take place in 15 cities and more than 100 college campuses running through August.

This will be aided by new marketing crusade across TV, social media and experimental channels.

It will an extension of Because I Can campaign which showcased the brand’s new packaging, modern design and four bold new flavors.

Coca Cola has indicated that the restage helped spark a 2018 turnaround for the brand, which posted retail dollar sales growth in Nielsen measured channels for four consecutive quarters after at least five years of decline.

We focused on modernizing Diet Coke to appeal to a new consumer base while at the same time connecting with our core drinkers by preserving the essence of what makes this brand so special.
We took smart risks in our approach to this holistic brand re-stage, and everything worked together to generate excitement and draw new fans to the brand.

As the rejuvenated brand enters year two after last year’s launch, the company expects to tap a new niche of a younger generation of consumers to boost sales.