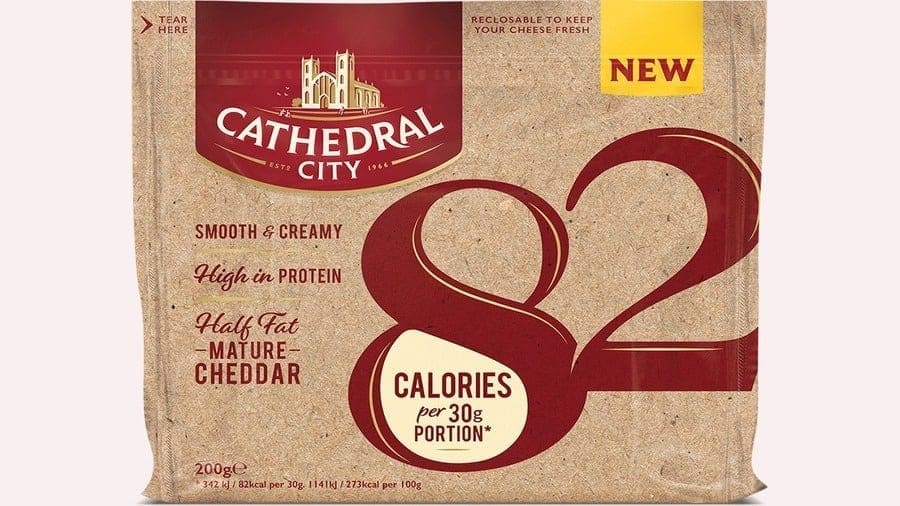 The new Cathedral City 82 is said to have a superior tasting, smooth and creamy half fat cheese, providing customers with a way to incorporate cheese in their diet.

It contains 82 calories per 30g portion and is high in protein, featuring 50% reduced fat and 33% fewer calories than standard cheddar.

The launch signifies commitment to healthy products given a global shift in consumer tastes and preferences, including demand for ‘reduced fat’ and ‘reduced’ or ‘no’ calorie diets.

The company however says the new range moves focus away from ‘reduced fat’ towards a more permissible calorie messaging, while dialling up on taste and quality cues via a standout packaging design.

“Health as a reason for food choice continues to grow, but for many there is still a perception that ‘lighter’ products will compromise on taste,” said Nigel Marchant, Cathedral City marketing controller.

“We’ve seen a more recent shift in government, retailer and consumer focus towards calorie reduction, and in response, a rise of calorie-based product propositions in other grocery categories such as ice cream, which are successfully changing consumer perceptions of ‘lighter’ offerings in their respective sectors.

“Cathedral City 82 aims to leverage this trend to offer consumers a healthier cheese that tastes great and that, at 82 calories per portion, they can readily incorporate into their daily diet.”

Dairy Crest, headquartered in Esher, UK was recently acquired by the Canadian dairy company, Saputo for US$1.2 billion (£975 million).

After successful takeover, the company said that its CEO, Mark Allen will step down to enhance a seamless transition.