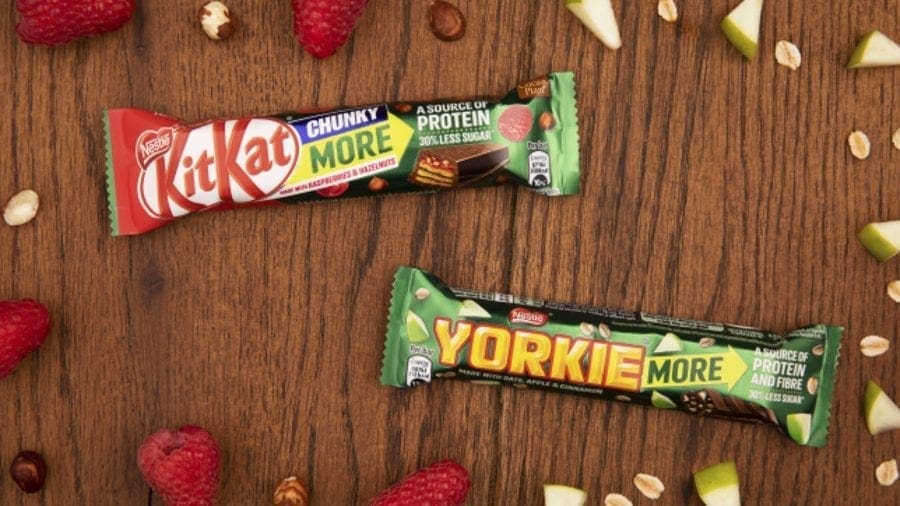 UK – Nestlé will be introducing new KitKat and Yorkie chocolate bars in the UK and Ireland as it continues to expand its less sugar confectionery ranges.

The confectionery giant said that both bars contain 30% less sugar than comparable chocolate bars in addition to more fruit, nuts and cereal as well as more protein and fibre.

Nestle will be introducing Raspberry & Hazelnut KitKat Chunky and an Oats, Apple and Cinnamon Yorkie into the markets, forming a new ‘MORE’ range from Nestle.

The bars were developed at Nestlé’s global research and development centre in New York, with the saying that “launch is another step in Nestlé’s ongoing work to innovate and develop its confectionery to provide better choices.

Nestlé claims that the launch is part of a long line of achievements that have come from the company’s continued efforts to “find new ways to improve confectionery and reduce sugar without compromising on taste and quality.”

Alex Gonnella, marketing director for Nestlé Confectionery in the UK & Ireland added: “We are really proud of these latest innovations.

“Whether it is fruit, nuts or oats; the fibre or protein they provide; this range really does offer more and is our next generation of chocolate bars with 30% less sugar.”

According to a FoodBev report, the KitKat Chunky More are expected to go on sale  early this month while the Yorkie More will follow before the end of the year.

Confectionary manufacturers in the market have notably increased their focus on introducing products with reduced levels of sugar, as part of a strong government-backed drive towards cutting sugar intake.

Nestlé has taken the lead with an announcement that the company would be producing a KitKat with no-added sugar, made purely from cocoa beans and pulp.

However, according to a research paper from the Queen Mary University of London, sugar levels in chocolate confectionery within the UK have risen significantly over the past two decades.

The study titled, ‘Cross-sectional survey of the amount of sugar and energy in chocolate confectionery sold in the UK between 1992-2017,’ conducted an analysis on consumer trends for a series of over 20 branded products

The study found that at the start of the survey period, sugar content stood at 46.6g per 100g, while 25 years later, it had in fact risen to a figure of 54.7g per 100g, Confectionery Production News reports.

The Scientific Advisory Committee on Nutrition (SACN) in the UK recommends that average free sugar intake, across the UK population, should not exceed 5% of total energy intake.