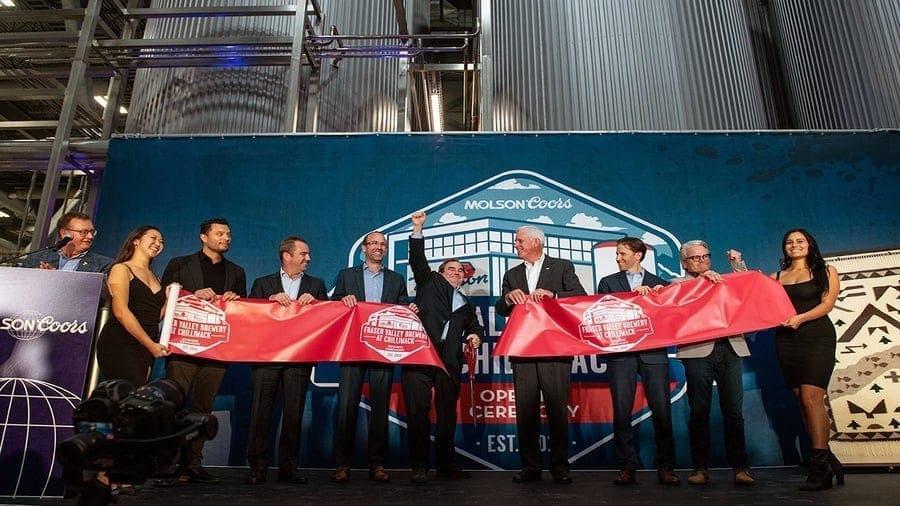 The facility will brew and distribute a wide range of Molson and Coors brands, as well as Granville Island beer and “others as demand arises” according to a statement from Molson Coors.

The brewery will house 100 employees and has the capacity to produce more beer than the the total amount of craft beer sold in the province in the 2018/2019 fiscal year.

The site is equipped with technology to deliver reduced energy consumption, CO2 emissions and carbon footprint, such as optimised equipment layouts to reduce beer loss and waste.

“This new modern brewery nestled at the foot of the Cascade mountain range of British Columbia in Chilliwack will proudly brew the Molson and Coors trademarks along with many other brands within our portfolio,” said Frederic Landtmeters, CEO of Molson Coors Canada.

“This brewery will primarily serve our western Canadian markets positioned strategically in British Columbia to offer an efficient and effective modern brewery to compete in this important market.”

“This modern brewery continues the long-standing commitment to our environment with sustainability at the heart of our operational excellence and efficiencies in our brewing and distribution operations.”

According to Molson Coors, the facility marks the most modern brewery in its network of 29 breweries globally.

The brewery is designed to integrate production of ready-to-drink products and flavoured beverages as part of the company’s efforts to stay relevant with consumers while shoring up its important beer products like Canadian and Coors Lite.

This will enable the brewer to strategically position its products lines with the evolving alcoholic beverage market.

“We’re constantly looking at innovation and introducing new products to the market, knowing that there’s interest in changing things up,” said Andrew Molson, chairman of the Molson Coors board.

According to Ken Beattie, executive director of the Beer Canada, which represents Canadian brewers, big breweries are taking a hit as customers are showing “a significant interest’ in flavoured drinks such as canned spirits.

“One of the cornerstones of the craft beer industry is that innovation and that creativity,” said Beattie adding that craft beers are also encroaching the market share predominantly enjoyed by big brewers.

Beattie estimates the market share for craft beer in Beer Canada has tripled over the past seven or eight years and now represents about 30 per cent of the total amount of beer sold in the province.

The pressure has an impact on Molson Coors second quarter results, after posting a 4.4% decrease in net sales. Company said the performance was affected by “unfavourable weather and weak industry demand”.