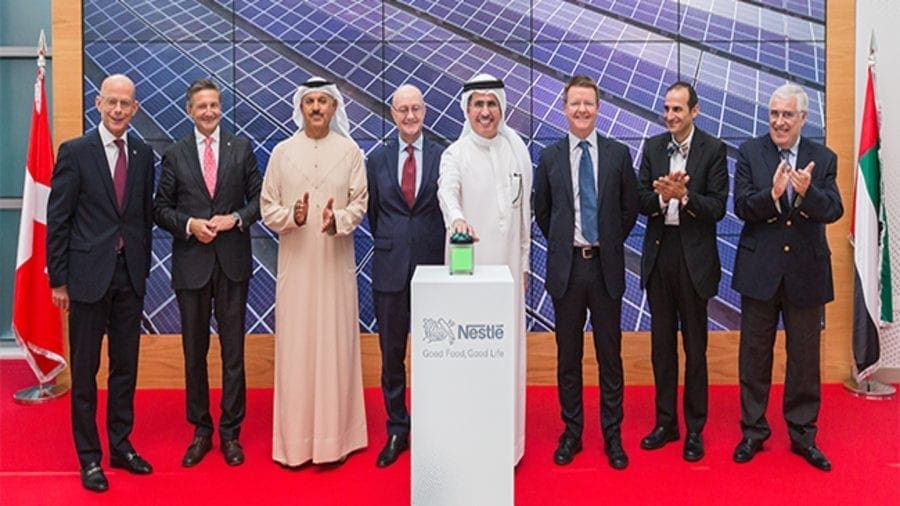 The solar energy plant, said to be the largest ground-mounted private solar plant in the United Arab Emirates, will house 20,000 photovoltaic (PV) panels, generating 7.2GWh of electricity per year.

Nestle said that the facility will be able to supply 85% of the Al Maha factory’s annual electricity consumption and eliminate 4.5 million kilograms of CO2 per year.

The food and beverage giant is also installing a total of nearly 28,000 PV panels at the three manufacturing sites in Dubai with a capacity of generating a total of 10GWh of electricity per year.

Nestle estimates that this will eliminate at least six million kilograms of CO2 emissions annually, the equivalent the energy consumption of 800 homes.

“Nestlé is committed to stewarding resources for future generations through caring for water, safeguarding the environment and acting on climate change,” said Marco Settembri, Project Head and Dean of the Swiss Federal Institute of Technology Lausanne (EPFL) in the Middle East.

“The solar plant in Dubai is an important contribution to Nestlé’s global ambition to achieve zero net greenhouse gas emissions by 2050. We are embracing the most ambitious aim of the Paris Agreement to limit global temperature rise to 1.5°C,” Settembri added.

One of the key targets outlined in the commitment is to use 100% renewable electricity in all Nestlé factories, warehouses, logistics and offices.

Currently, one third of Nestlé’s 413 factories in the world are already using 100% renewable electricity, and the company will continue to increase the use of energy from renewable sources.

The company produces with zero waste for disposal at its food manufacturing sites in the region.

In addition, the Maggi, Nescafé brands owner is also developing multi-sectoral partnerships and research to achieve the goal announced by Nestlé in 2018 to make 100% of the company’s packaging recyclable or re-usable by 2025.

Recently, the company opened the Nestlé Institute of Packaging Science in Lausanne (Switzerland) to evaluate and develop new sustainable packaging material and solutions in collaboration with academia, suppliers, startups, and others.

Nestlé has also joined the ‘One Planet Business for Biodiversity’ (OP2B) coalition to take bold actions in protecting and restoring biodiversity with an aim of fostering transformational change in the food and agriculture systems.