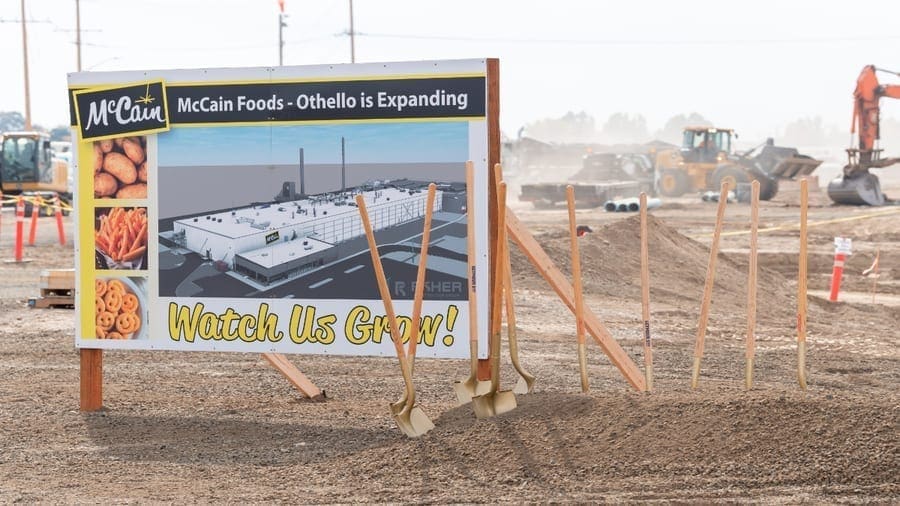 USA – Frozen potato and snack food products manufacturer, McCain Foods USA has initiated construction of a US$300 million expansion project in Washington, US.

The company said the investment includes a new state-of-the-art battered and conventional French fry processing line that will add a 170,000-square-foot space at its potato processing facility in Othello, Washngton.

McCain Foods says that the US$300 million project is estimated to bring 180 new jobs to area residents and will require an additional 11,000 acres to be sourced from Washington potato growers.

“This $300 million expansion will deepen our roots and commitment in this great state and grow the potato industry for years to come.”

Currently, the facility employs more than 450 workers and distributes millions of pounds of frozen products. The expansion project is scheduled for completion in early 2021.

The company has in the recent past completed several expansion in the United States including expanding its distribution center in Burley, Idaho and uprgrading infrastructure at its Portage la Prairie and Carberry facilities.

In July, the company announced plans to build a first french fry facility in Brazil in addition to a US$9 million investment in its Florenceville potato processing facility in Canada.

The maker of potato specialties and appetizers has also invested in New-York based chicken nuggets startup, Nuggs as it looks to strengthen its position in plant-based solutions.

In July, Nuggs raised US$7 million in a funding round led by McCain, officially launching its product Nuggs, a more advanced version of the animal-based chicken nuggets.

McCain said the investment is aligned to its long-term sustainability priorities in the food industry.