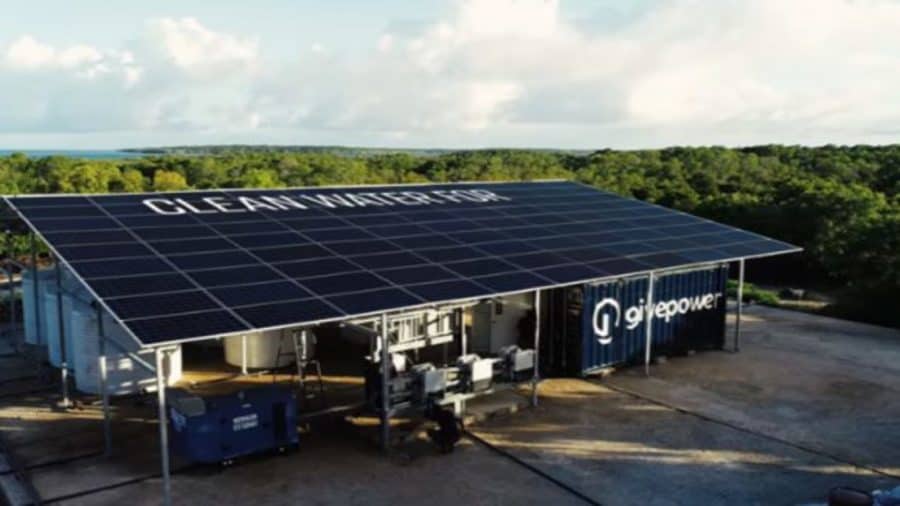 The solar powered farm is sited by the Indian Ocean in the village of Kiunga on the Eastern coast of Kenya. It is a region which has seen extreme drought for many years and denying the 3,500 residents access to hygienic drinking water.

The solar water farm will harvest solar energy which are able to produce 50 kilowatts of energy and power two water pumps that run 24 hours a day and it turns salty water safely into drinkable water.

As GivePower’s first project, the Kiunga facility costed US$500,000 to build and took a month to construct. The organization hopes to generate US$100,000 per year from the system and use that to fund facilities in other places.

Barnard’s goal is to cut the construction cost down to US$100,000 per plant in the future. It is expected to provide 20 years of access to clean water and it is reportedly and benefit over 25,000 people daily

“With our background in off-grid clean energy, GivePower can immediately help by deploying solar water farm solutions to save lives in areas throughout the world that suffer from prolonged water scarcity,”

With a population of 50 million, 41% of Kenyans still rely on unimproved water sources, such as ponds, shallow wells and rivers, while 71% of Kenyans use unimproved sanitation solutions.

These challenges are especially evident in the rural areas and the urban slums. Only 9 out of 55 public water service providers in Kenya provide continuous water supply, leaving people to find their own ways of searching for appropriate solutions to these basic needs.

In 2013, Barnard started GivePower as a nonprofit branch of SolarCity, a solar-panel company that Elon Musk helped found in 2006. SolarCity merged with Tesla in 2016, but Barnard spun GivePower off as its own organization shortly before that.

The nonprofit mostly focuses on building solar-energy systems to provide electricity across the developing world.

GivePower has installed solar grids in over 2,650 locations primarily schools, medical clinics, and villages across 17 countries, according to its website.