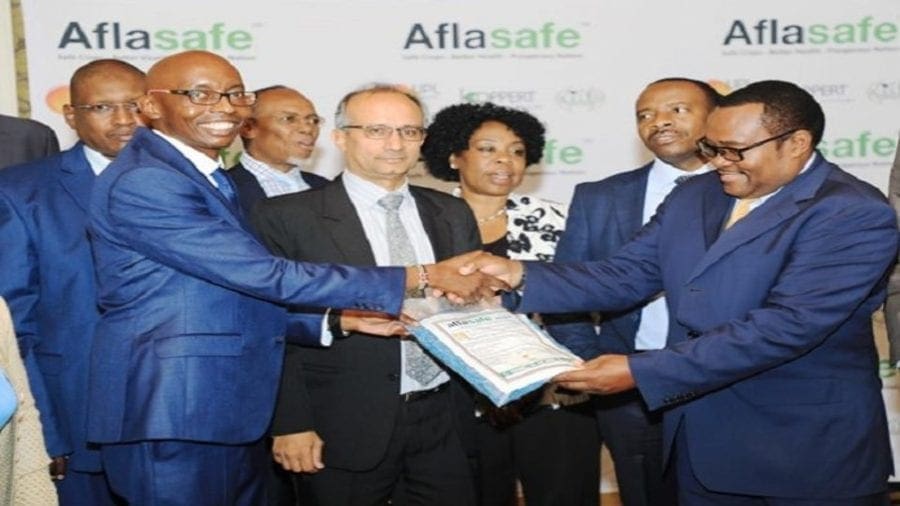 KENYA – The government of Kenya has contracted a biological crop protection company, Koppert Biological Systems to distribute Aflasafe, a natural product that fights aflatoxin, to all farmers in the country.

This follows the recent occurrence of cases of the prevalence of Aflatoxin in food stuffs in the Kenyan market such as Maize meal, milk and peanut butters which has led to some of the brands recalled.

Agriculture Principal Secretary (PS) Prof. Hamadi Boga said that Aflasafe, a new technology developed a few years back to fight Aflatoxin in maize, groundnuts, and other food crops will be sold to farmers at Shs.201 for one kilogramme.

“For long farmers mainly, the small scale have been grappling with high presence of aflatoxin in maize more than the standard level of parts per billion (PPP) of 10ppp in Kenya and 4ppp in European Union,” he said.

The new technology has been achieved after intensive research work of over 15 years and great partnership between The Kenya Agricultural and Livestock Research Organization (KALRO) and the International Institute of Tropical Agriculture (IITA), with the support of United States Agency for International Development (USAID), United States Department of Agriculture (USDA), as well as the Bill and Melinda Gates Foundation.

Prof. Boga said that the move will have the associated benefit of reducing health risks of consuming aflatoxin-contaminated food which will shield the country against economic burden of managing resultant chronic illnesses such as cancer.

Health experts and local scientists have blamed the high presence of the aflatoxin to liver cancer, suppresses the immune systems, retards growth and development of children, among other health problems.

Prof. Boga added that, “For any new technology to be useful to the public, it would need to be adopted and widely used. This is the reason why KALRO went ahead with a process to identify a competent distributor through an open and competitive process,” he said.

The company was picked out of seven applicants that had applied for the tender after Government sought an expression of interest last year.

KALRO Director General (DG), Dr. Eliud Kireger said, “The factory price of Aflasafe stand at Sh.135 per kilogram and the same is expected to increase to Shs.201 per kilogramme, owing to logistics and transport cost.”

He added that the reason they decided to engage the private sector in distribution of Aflasafe is because they currently have 157 metric tonnes of Aflasafe at Katumani Factory for the last eight months which they could not distribute because they don’t have the logistics capability.

Koppert Biological Systems General Manager, Charles Macharia, stated that his company has a wealth of experience in handling biological crop protection products and have a wide distribution network which will ensure the products reach all farmers.

“Equally, our plan is to involve distributors and agro-dealers based in the counties and must be fully licensed to avoid sale of counterfeits.”

“However, we have lined up some mechanisms to protect the farmers from that and we are working on traceability model from the factory all the way to the retail by using the available technology such as the scratch and SMS type which is already in process,” explained Macharia.

Maize is recognized as a key contributor to food security, serving the staple food needs of more than 90 percent of the Kenyan population.

With a national production of 40 million bags and a consumption of 52 million bags, the country perpetually experiences a maize deficit.

The government aims to increase Kenya’s maize production from the current 40 million to 67 million bags by 2022.

According to Prof. Boga, achieving this target would be futile if in turn a big percentage of this maize is contaminated with aflatoxins as this leads to condemnation and destruction of such produce.

Other than distributing the farm input to farmers, they will be trained on how to use the new anti-aflatoxin technology and embrace it in their farming activities.