Since we last ran a profile of the dairy industry in Uganda in 2015, a lot has changed in the sector, as country continues to attract new investments and the sector becomes more sophisticated, to meet increasing demand for dairy products in the country, region and internationally.

From its lush green fields, abundant rainfall and fertile soils, Uganda has made long strides in its food security journey over the last nearly four decades, since peace was restored in the East African country, following more than 20 years of instability and stagnation in economic and agricultural development.

In the recent past, apart from the booming coffee sector, the dairy sector has stood out for its ascent from the embers of the violence and chaos that was the hallmark of Uganda since it gained its independence from Britain in 1962 – that decimated the country’s vast potential as a leading source of agricultural produce, from fruits and vegetables, coffee, tea, grains, milk, meat, fish and legumes and many more.

The dairy sector in Uganda is one of the most important sectors in the country’s quest to boost the economy and its food and nutrition security – especially considering that Uganda has one of the youngest populations in Africa and the World, with a median age of 17 years. With a fast growing population that is growing at 3.32% per annum and which is more than 45 million in early 2020, Uganda’s demographic figures point to a country that is in need of a food and agro industry to feed its rapidly urbanizing population, which currently makes up just 26% of its total numbers.

The Minister of Agriculture Animal Industry and Fisheries (MAAIF) reports that the country’s large, medium, small scale and cottage dairy processing plants numbered 120 in 2017/18 with total processing capacity of 2.72 million litres, which rose marginally to 135 in 2019 with a processing capacity of 2.8 million litres a day, with the increment largely attributed to increased investments in cottage dairy processors across the country.

According to the Ministry, the main products exported by Uganda’s dairy companies include casein, whey proteins, UHT and milk powder that are mainly exported to Eastern Africa, the COMESA and SADC trade blocks, UAE, Nigeria, Syria, Japan, Oman, USA, Nepal and Bangladesh.

“With the opening up of new markets, farmers in Uganda have been provided with a bigger outlet for their milk and this creates more opportunities for them.”

The future prospects for further growth in milk exports from Uganda, especially to its most important export market in the region, Kenya, was dealt a blow when Kenya formulated restrictive conditions in early 2020, that basically stopped any milk exports into the country from Uganda in order to protect its own industry that had been inundated with cheaper milk products. This put paid to Uganda’s erstwhile booming exports into Kenya that was at one time said to have hit 110 million litres by the third quarter of 2019.

With a booming industry, the sector faces a challenging future, as new investments rise in the sector, while consumption lags below the booming milk production in the country. DDA figures show that the country’s milk per capita consumption hit 63 litres in 2018, way below the recommended quantities by the World Health Organization. The regulator says that it continues to prioritize milk consumption campaigns in an effort to have every Ugandan consume at least 200 litres of milk annually, per the WHO.

According to the DDA, Uganda offers a compelling case for new investments and product diversification for local, regional and international markets, better than any other country in Eastern Africa due to the increasing quantities of milk and the opportunity to export milk products into potential markets in the EAC and COMESA, to which the country is a member, and into Southern and Western Africa and internationally.

The authority reveals that the substantial increase in milk production and productivity in the country are calling for more investments in cold chain infrastructure, milk collection and bulking centres, milk transportation and processing facilities to reduce post-harvest losses and boost incomes and economy of the country. With about 80% of the total milk produced marketed but only 33 % of the marketed milk processed into value added products, the DDA is seeking investors to pump in the cash to improve this figure to at least 50% – and the investments are flowing in.

Following the liberalization of the dairy sector, which began with the privatisation of the once government-owned monopoly Uganda Dairy Corporation in 2004, when Agriculture & Livestock bought a stake in the dairy processor, the dairy industry in Uganda has seen frenetic growth, with the decade starting 2010 being the most dramatic. Over the space of only a decade, Uganda came from a country dependent on imported milk from mainly Kenya, to a surplus, as the decade ushered in a surge in local, regional and international players into the sector.

Most of the leading dairy companies in Uganda – including Pearl (of the Lato brand), Jesa, Brookside Uganda, Amos, GBK, Paramount, Lakeside and Vital Tomosi have been in existence for less than 10 years, and yet they continue to invest aggressively to improve capacity and boost efficiencies.

The dairy sector has seen two key entrants in the last few years, with leading Kenyan dairy Brookside acquiring the stake previously held by Sameer Agriculture and Livestock to create Brookside Uganda and Vital Tomosi, which produces the Milkman brand and is a joint venture by the founding Tomosi family and the Vital Capital Fund, a US$350 million private equity fund that makes impact investments in developing nations, primarily in Sub-Saharan Africa.

Two major players, Amos dairies, which processes more than 300,000 litres of milk per day to produce high value casein for the export market and Pearl Dairy, with a capacity of 800,000 litres per day, and which produces milk powder, yoghurt, butter, ghee and UHT milk, have revolutionised the dairy sector in Uganda, and have been largely responsible for the surge in export volumes into the regional and international markets.

And it is not only the Vital Capital Fund that has invested in the sector. The Rise Fund, a global impact investment fund managed by American private equity firm, TPG Capital acquired a reported 34% stake in Pearl Dairy in 2019 to enable the dairy processor expand and enhance its operations, in addition to an earlier investment by the IFC in the firm. Jesa Dairy, one of the pioneer dairy processors in the country, is building a new, bigger 2,700m2 plant that will be ready in 2021 near Kampala, to boost its production capacity.

As older players continue to invest in the sector, smaller ones including the likes of Rainbow Industries, GBK Dairy, Kooky Enterprises, Paramount Dairies, Mama Omulungi Dairy Limited and scores of others are also contributing to the country’s quest to be self reliant and to supply the regional markets with its milk products. 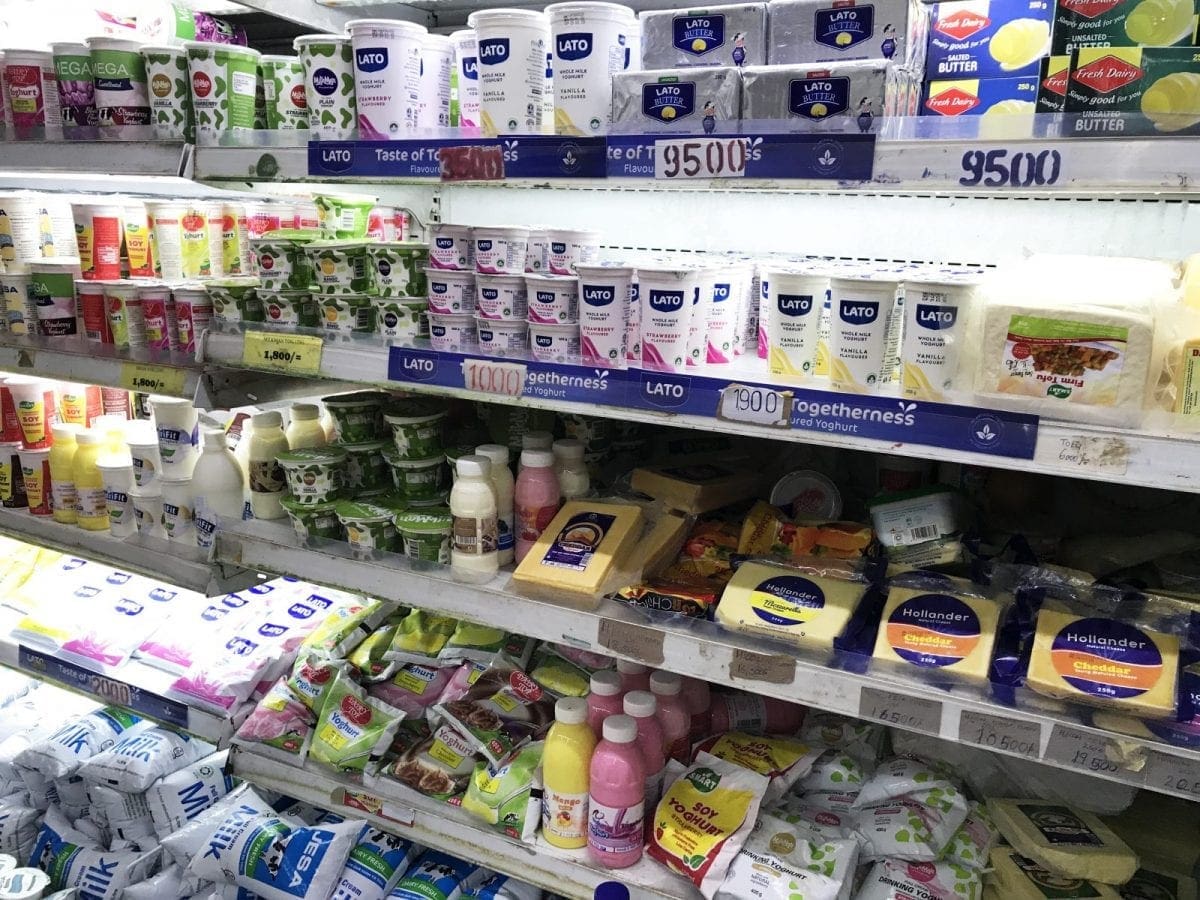 As investments surge, the pace of new product innovations has also increased in tandem, to meet changing consumer needs and aspirations.

In the fermented milk category, the Ugandan consumer was very comfortable with traditionally fermented milk packaged in loose plastic bags for a long time, but this is changing, albeit slowly. Flavoured and fruit yoghurt variants, with the latest cup packaging and branding are increasingly hogging the shelves in the country’s informal and formal retail shops as consumer wants and experiences move up the scale.

Brookside Uganda, Jesa, Vital Tomosi and Pearl Dairy are leading the charge, introducing an array of flavor options that the Ugandan consumer was used to finding in Kenyan shelves, whenever they travelled to their neighbouring country.

In the packaged milk category, UHT milk products have increasingly become the norm, considering the huge infrastructural challenges and the need to access markets far away from the processing plants within the country and in the regional markets of Eastern Africa. Higher value products such as cheese and ice cream, although increasing in popularity, are still small in comparison with packaged milk and fermented products.

However, Uganda’s dairy sector is a leader in the milk powder and casein production, with Amos Dairy and Pearl Dairy producing vast quantities per year for regional, and importantly, international markets.

The dairy industry in Uganda has undergone one of the fastest transformations that the food industry in Eastern Africa has ever witnessed – and the future can only get better, but the lack of adequate local market for its vast potential is standing on the way of the sector’s continued growth.

Talking at the end of the hotly contested presidential elections that were held in early 2021 on the status of the economy, the country’s President Kaguta Museveni decried the lack of adequate purchasing power in Uganda, citing the dairy sector as one that could do better if more Ugandans were capable of spending more on the purchasing of processed milk. In this regard, the regional markets within the East African community, including Kenya, where milk production can barely meet demand and consumer prices are high, are the best options if Uganda is to boost milk processing and consumption – in addition to international markets.

The country’s leading dairy operator Pearl Dairy has taken the initiative to broaden its markets following the passing of the Africa Continental Free Trade Area (AfCFTA) agreement, which is in force across the Continent. The company in August 2020 announced the expansion of its yoghurt and milk powder products into the markets of Ethiopia, Malawi and South Sudan, following the ratification of the trade deal, the biggest and most comprehensive in Africa’s trade history – expanding its markets into eight countries, with Algeria the next in line on its potential markets in Africa.

“With the opening up of new markets, farmers in Uganda have been provided with a bigger outlet for their milk and this creates more opportunities for them. This expansion presents a great boost to the entire dairy value chain in Uganda considering the current situation in the sector,” said Bijoy Varghese, the Pearl Dairy Farms General Manager.

“With a strong backward integration program, based out of Mbarara, we are aligning with more and more farmers to fulfill the current and future demand. These opportunities will lead to the creation of jobs and better the livelihoods of the local farmers due to increased demand in exports,” Varghese added.

As milk production in Uganda is forecasted to continue to increase, following initiatives such as Pearl Dairy Farmers Project, undertaken in partenership with the IFC to boost dairy production in Uganda; plus the rapid commercialization of farming in the country’s main milk belt in the western region. East Africa’s largest dairy exporter is at the forefront of revolutionizing the milk sector in Africa and beyond in the near future.

This feature appeared in the January/February 2021 issue of Food Business Africa. You can read the magazine HERE

#moversandshakers
Five years after the first beer rolled out from Bature’s taproom, the company has grown in leaps and bounds. Today, it still holds the
title of being Nigeria’s only International Award-winning brewery.

The three interconnected issues of food safety, food nutrition and food security are some of the most challenging in Africa’s quest to provide adequate, nutritious and safe food to its growing population.